HomeDomestic Violence Awareness Month
A- A A+

Domestic Violence Awareness Month (DVAM) evolved from the Day of Unity conceived by the National Coalition Against Domestic Violence in October 1981. The goal was to connect advocates across the nation who were working to end violence against women and their children. The Day of Unity soon became an entire week devoted to a range of activities conducted at the local, state and national levels.

For details, see the tabs below.

She Screams Without Sound was established in 1988, when more than 20 Hamilton County women were killed by their intimate partners. Alarmed by the devastating number of victims, employees of Women Helping Women and the YWCA decided to do something to raise awareness in the community and in the Hamilton County court system.

A candlelight vigil memorial has been held every October since 1988 during Domestic Violence Awareness Month to honor the victims, both known and unknown. We celebrate the lives of those who have survived domestic violence, and we provide support and hope to children exposed to violence and loss.

Sip for a cause!

Each month, Rhinegeist Brewery (1910 Elm Street, 45202) highlights four local non-profit organizations that are BREWING POSITIVE CHANGE in our community. Grab a pint Wednesday, October 12th from 5-8 pm, receive a token with each pint purchase, explore each organization, and vote for your non-profit of choice (YWCA, we hope!) by placing your token in their designated dropbox.
You may also make a monetary donation in any dropbox.
At the end of October, YWCA of Greater Cincinnati will receive a donation based upon the amount of “votes” we receive, while the organization with the most votes receives a bonus. So grab your pals, grab a pint, and support our work! Purple is the color representing Domestic Violence. Each year, our amazing partners at the Duke Energy Convention Center light up the CINCINNATI icon sign for the She Screams Without Sound Candlelight Vigil. This year, the sign will be illuminated on Tuesday, October 25th.

Thanks to our amazing local partners for helping raise awareness during this month!

Thanks to our friends at the Cincinnati Reds, we have bathroom posters and mirror clings with information on our services for folks in need, and we had the pleasure of sending some key staff to throw out the first pitch at the July 26th game! Each year, Clermont County Board of County Commissioners present a proclamation declaring October as Domestic Violence Awareness Month. This year, the proclamation will be made on Tuesday, October 4th. 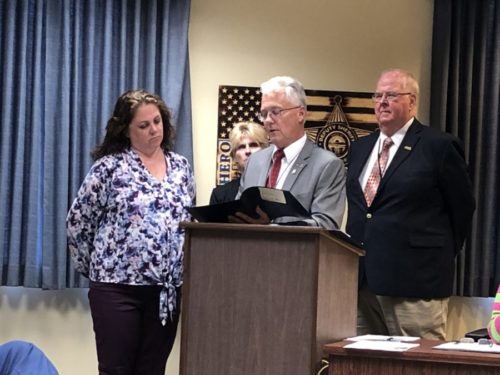 Commissioner David Painter, pictured on right, read a past proclamation, which was presented to Stephanie Shoe, pictured on left, intervention coordinator at the YWCA.

We are grateful for the county’s support of this important event. 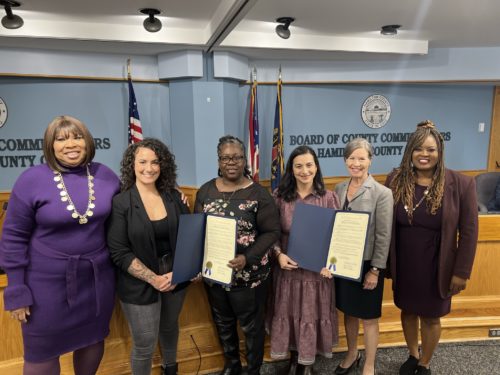 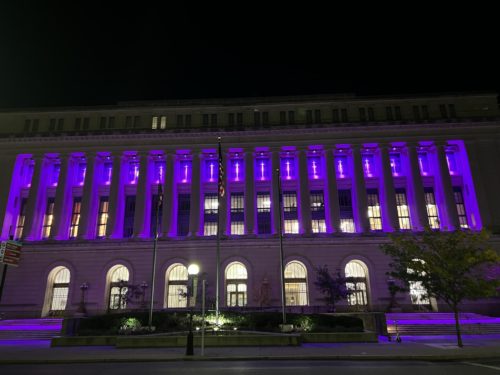 The Hamilton County Courthouse will be illuminated purple during the month of October in honor of Domestic Violence Awareness Month.

Last year, we partnered with Kroger and their Little Clinics to bring information from domestic violence advocates straight to visitors of The Little Clinic.

During their visits, patients found pamphlets in and outside exam rooms, so they could pick one up for themselves or someone they know. The information inside provided insight into domestic violence as well as resources.

Domestic violence is a pattern of behavior used by one person to gain and maintain power and control over another person in an intimate relationship. Warning signs of domestic violence you might see include:

CLICK HERE to learn more about women of color and domestic violence.

CLICK HERE to learn more about abuse in LGBTQ relationships.

Sometimes it can be hard to intervene when you see one of these warning signs. You might be worried the violence could turn on you, that you’ll ruin a relationship with a couple you care about, or that you might be embarrassed if it doesn’t go well when you do intervene. The good news is that you have lots of options. No matter what makes it hard for you, there’s almost always something you can try.

You can try being direct by saying things like:

You could also try creating a distraction to prevent violence from happening or keep the situation from getting worse:

If you don’t want to say something or create a distraction, you can always delegate by asking someone else to do something:

You also don’t have to wait for a warning sign to do something. There are proactive things you can do every day to make it less likely domestic violence will happen in our community:

If anyone you know is experiencing domestic violence, the YWCA hotline is available 24 hours a day, 7 days a week.

CLICK HERE to learn more about services for survivors.

JOIN US on Saturday, October 8th from 12 – 5 pm, YWCA Greater Cincinnati will be partnering with soHza sister at their brick-and-mortar across the river on Mainstrasse in Covington, KY. We are excited to see you there!

What is Week Without Violence?

Week Without Violence is part of a global movement to end violence against women and girls with YWCAs across the country and around the world. At YWCA, we know that not all violence is acknowledged or responded to equally. That’s why, for more than 20 years, YWCA has set aside one week in October as a Week Without Violence. Join us from October 17 to 22. Together we can end gender-based violence. This year, we are discussing a few ways that we can create a world without violence:

KNOW THE FACTS. Educate yourself and those around you about domestic violence and gender-based violence.

…and these are just a few. At YWCA Greater Cincinnati, we are firm believers in knowledge being the first step to change, so get to know the facts.

ELIMINATING HARMFUL QUESTIONS. One of the first questions that a victim of domestic violence is asked is: “Why did you stay?” This question is asked by law enforcement, judges, family, and friends. The assumption is that she stayed by choice and that she must take responsibility for enduring abuse at the hands of her perpetrator. Asking why she stays, however, detracts from holding perpetrators of violence accountable for their actions. Additionally, it doesn’t take into account the numerous cultural and systemic barriers that prevent victims of domestic violence from leaving their abusers.

We believe and support survivors first.

HAVING CONVERSATIONS WITH TEENS ABOUT HEALTHY RELATIONSHIPS. Domestic Violence (DV) and Intimate Partner Violence (IPV) can start at a young age, and in multiple ways. By fueling our youth with tools to notice the signs of violence, whether at home, with a friend, or in public spaces, we are reducing the occurrence of violence and preventing its harmful and long-lasting effects on individuals, their families, and the communities where they live. During the pre-teen and teen years, it is critical for youth to begin learning the skills needed to create and maintain healthy relationships so that they may carry those skills into adulthood.

TAKE CARE. Service providers, advocates, and activists in the fight to end violence all care deeply about these issues, and about the survivors that they help each and every day. Unfortunately, this work can also cause vicarious trauma for individuals as they work with survivors who have undergone serious trauma or can retraumatize individuals who are survivors themselves. Taking the time to engage in healing and self-care as a provider, advocate, activist, or survivor is an integral part of your own mental and physical well-being and will help make you an even more powerful advocate for your causes and clients.